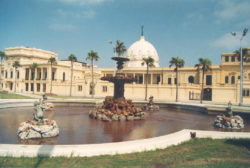 Ras Al –Teen palace enjoys an outstanding historical position since it is one of few palaces that witnessed the initiation of Mohamed Aly’s dynasty. It was also where the departure of the ex- monarch Farouk, the family’s last heir, took place. A number of foreign engineers, among others, Yezi Bek, his assistant La Vial and Mrs. Le Veroige, were assigned for the construction of the palace. Building activities began in 1834 taking eleven years until it was completed in 1845. However, complementary work and establishment of additional wings continued until 1847 when it was officially inaugurated.

Ras Al –Tin Palace, which initially took the shape of a Roman fort characteristic of several round pillars and Italian ornaments inspired by the renaissance, is considered the oldest among existing palaces. It was erected on an area of around 17 thousand square meters surrounded by a marvelous garden of 12 Feddans. Fig (teen) trees were planted in the site where the palace was constructed, due to which; it was called Ras Al-Teen (fig).

The palace remained, during the reign of different kings, to be used as the government headquarters, to which, they moved during the summer. Different rulers made several changes to the palace, which was totally reconstructed, by King Fouad I, using modern design turning it to be similar to, but smaller than Abdeen Palace in Cairo. The reconstruction activities supervised by Italian engineer Veroci cost L.E 400,000.

The palace included a swimming pool attached with a large hall and covered with glass. Ex – Monarch Farouk, after World War II built instead on the wave breaker a marine pool. The pool was linked to Ras Al – Teen palace with a long pavement. In order to arrive to the pool by land, a jeep had to be used passing through the wave breaker with great difficulty. The royal rest house built near the pool consisted of a bedroom, a fully equipped kitchenette as well as several rooms used for storing fishing equipment.