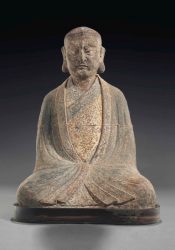 The figure is shown seated wrapped within his layered priest’s robes. His face is cast with prominent features set in a stern, contemplative expression enhanced by the sharply angled eyes below bushy brows, and he has large ears and a bald, knobby head. A lengthy dedicatory inscription is cast in relief on the back. There are areas of rust and traces of pigment, wood stand.