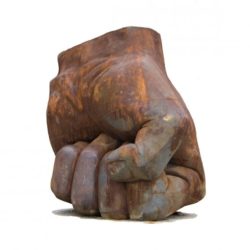 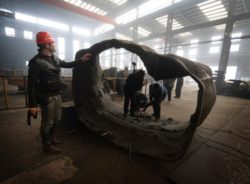 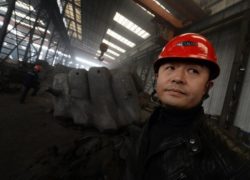 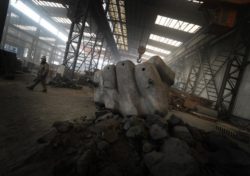 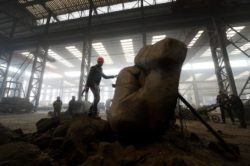 One of the concepts behind “Hiding in the City” was how smog in China has made compatriots like himself invisible – in an interesting twist of fate, he chose to cast his iron fist in one of the most polluted industrial cities in China. On the day of his interview with AFP, the air pollution in Tangshan was the highest in China. Of the smog, Bolin said: “It’s a real cause of anxiety. There’s nowhere to hide…there is smog in the air, and it’s impossible to only have us inhale, not exhale.”

TANGSHAN, China: Emerging from the acrid fumes at a steelworks, artist Liu Bolin inspects the progress of his latest work – a giant iron fist, poised to punch a hole through modern China.

Weighing more than seven tonnes and 3.6 metres (12 feet) tall, the sculpture will go on show in Paris later this month, as Chinese President Xi Jinping visits the country.

“The inspiration for my ‘Iron Fist’ comes from my reflections on the realities of China,” Liu told AFP.

“People are under pressure from so many things – their living conditions, the political situation, even the air around us.”

Liu is best known globally for his “Invisible Man” photographs, in which he is meticulously made up and his clothes daubed in camouflage paint so that he blends almost seamlessly into everyday backgrounds, from supermarket shelves and magazine racks to bulldozers.

He is at the forefront of China’s crowded contemporary art scene, and his use of consumerist subjects earned him comparisons with Warhol and his Campbell soup cans.

But he has a different take.

“China as a developing country will encounter a lot of problems, which become the source of artists’ inspirations,” he said. “Many ideas in my creations are from the issues.”

A youthful-looking forty-something with an athletic build, he went on: “I’ve been called China’s answer to Andy Warhol because of the commercial images in my work.

“But I didn’t intend to focus on the consumption. Andy was maybe on the positive side, he was praising that society. I pay more attention to food safety in China.”

The country is regularly hit by food scandals, including one that involved tainted baby milk formula that killed six children and sickened 300,000 others.

“What I tried to express was my fears that, when I go to buy a drink, I don’t know if it’s safe,” Liu said.

Eli Klein, a New York gallerist who has shown Liu’s creations for more than six years, describes his work as creating “a beautiful aesthetic and message”.

“It shows that the artistic level of expression permitted in China is much greater than one would think,” he said.

Nonetheless Liu is an admirer of the works of Ai Weiwei, the dissident artist who was detained for 81 days in 2011, later had tax evasion charges against him dropped, and is currently denied a passport.

“His works have immeasurable enlightenment and give guidance to Chinese people,” Liu said. “I think his works have a sharp reflection on society, going straight to the most unspoken point.”