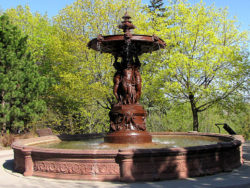 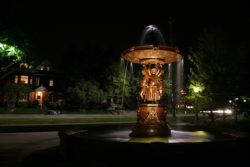 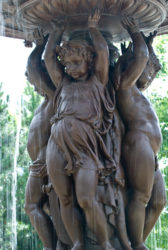 Strathcona Park is a large park in Ottawa, Canada. It lies on the west bank of the Rideau River and marks the eastern edge of the Sandy Hill neighbourhood.

The area of the park was originally the swampy floodplain of the river, and was impossible to build on. The site first became home of the Dominion Rifle Range, where soldiers had trained before departing for the Second Boer War. This history is preserved in the name of Range Road, which runs along the west of the park. The area was turned into a park by the Ottawa Improvement Commission between 1904 and 1907. It was named after Lord Strathcona, a Canadian businessman and politician who had financed his own regiment in the Boer War.
The most prominent feature of the 15-acre (6.1 ha) park is the fountain standing atop the hill that was donated by Lord Strathcona in 1909, scupted by Mathurin Moreau.
The park’s original design was a classic example of English public park design. It contained a pair of small ponds, gazebos, and Ottawa’s first golf course. In the 1940s, the ponds were filled in due to their expense, and replaced with a wading pool. A baseball diamond was constructed at the southern end of the park in the 1920s and for many years was Ottawa’s main venue for the sport.
1 501 vues