Sculptor Pete Sainty collects fossils, shells and crab claws from the shoreline and uses their patterns as he creates his works of art. Emily Lambert chats to him about his new exhibition. 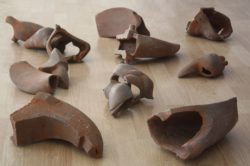 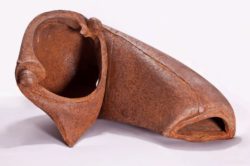 There’s an area of Liverpool, alongside the banks of the River Mersey which the locals call The Cast Iron Shore.

It’s a place that has inspired artists for generations – from The Beatles, who sang about it on their White Album, to Booker Prize-nominated author Linda Grant, who wrote about it in her novel of the same name.

“When I was growing up I assumed it was called The Cast Iron Shore because it was where people dumped their cast iron beds and where something that could be called a ‘shore’ was visible so close to the south docks, but apparently there was once an iron works there,” explains Cardiff-based, Liverpool-born sculptor Pete Sainty, who has named his latest exhibition A Cast Iron Shore.

“It’s also one of the few areas along the river where the rock formation is visible.”

As well as being a fond memory of “The Cazzy”, the exhibition title refers to Sainty’s practice of collecting ammonite fossils, curious-shaped shells and crab claws from the shoreline and using their patterns and forms to create sculptures in cast-iron, bronze, aluminium, concrete and fibre glass.

The exhibition, which opens at Oriel Canfas in Cardiff, tomorrow then moves to Galeri in Caernarfon in the new year, is a collection of Sainty’s new large and small-scale sculptures and drawings. The centre-piece will be five larger-scale, inter-connecting cast-iron floor pieces measuring up to 50-inches wide and each weighing up to 150kgs. There will also be smaller pieces from previous exhibitions following the same coastal theme and drawings of the sculptures.