Another of Boston’s oldest European-style fountains is Brewer Fountain (1868) in Boston Common near Park Street station.
The fountain, by Paul Lienard and Mathurin Moreau, was purchased by Boston merchant Gardner Brewer at the Paris Exposition of 1867.

This is one of Boston’s nine fountains that do not circulate water, so these fountains are not turned on because they would waste water. Although the fountain is empty it is a perfect perch for pigeons who sit on every available ledge. 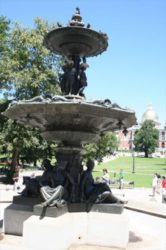 One of the most conspicuous objects on the Common, standing in the lawn near the Park Street wall, is the Brewer fountain, the gift to the city of the late Gardner Brewer, Esq., which began to play for the first time on June 3, 1868. It is a copy, in bronze, of a fountain designed by the French artist Liénard, executed for the Paris World’s Fair of 1855, where it was awarded a gold medal. The great figures at the base represent Neptune and Amphitrite, Acis and Galatea. The fountain was cast in Paris, and was procured, brought to this country, and set up at the sole expense of the public-spirited donor. Copies in iron have been made for the cities of Lyons and Bordeaux; and an exact copy, in bronze, of the fountain on the Common was made for Said Pacha, the late Viceroy of Egypt. 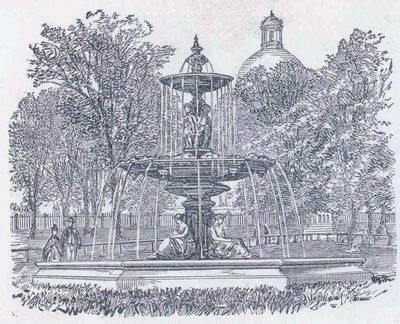 About Gardner Brewer, he was born in Boston in 1800 and died in Newport, RI in 1874. He was one of the wealthiest and most liberal of Boston merchants. After attaining his maturity he was for some time a distiller, but afterward engaged in the dry-goods trade, and founded the house of Gardner Brewer & Co., which represented some of the largest mills in New England, and had branches in New York and Philadelphia.

In the dry-goods business, by accurate method combined with great sagacity, he accumulated a fortune which, at his death, was estimated at several million dollars.

Mr. Brewer at one time took an active part in politics as a Republican. He was also a strong protectionist, and took great interest in the industrial development of the country. He used his large wealth liberally for the public good, and shortly before his death gave to the city of Boston [this] beautiful fountain, which stands on an angle on Boston Common. His residence, on the site of the house of John Hancock, was one of the finest private dwellings in the city. The Great Boston Fire of 1872 destroyed the old warehouse of the firm; but before the end of 1873 a new building, one of the costliest in Boston, was erected on its site. Mr. Brewer died at his seaside villa in 1874.

Mr. Brewer had also donated some rare books to the Museum of Fine Arts.  On the inner front were labels bearing his name and the motto: “Memor et Fidelis,” which translates to “Mindful and Faithful.”